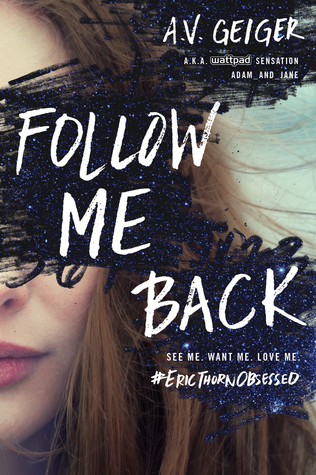 Received as a Christmas gift- print!

Tessa Hart’s world feels very small. Confined to her bedroom with agoraphobia, her one escape is the online fandom for pop sensation Eric Thorn. When he tweets to his fans, it’s like his speaking directly to her…

Eric Thorn is frightened by his obsessive fans. They take their devotion way too far. It doesn’t help that his PR team keeps posting to encourage their fantasies.

When a fellow pop star is murdered at the hands of a fan, Eric knows he has to do something to shatter his online image fast—like take down one of his top Twitter followers. But Eric’s plan to troll @TessaHeartsEric unexpectedly evolves into an online relationship deeper than either could have imagined. And when the two arrange to meet IRL, what should have made for the world’s best episode of Catfish takes a deadly turn…

I enjoy when a book incorporates technology and does it well. I thought the integration was great and easy to follow between actual writing and twitter conversations. It had a fun plot that is appealing to teens, especially ones who consider themselves fangirls. I wanted to keep reading it to see where A.V Geiger was going to take me. A relationship formed between me and the characters, something I find important for an author to accomplish.

This section might be longer than it should be… Tessa has a phobia that is slowly piece together throughout the book, it was so spread out and vague that it was hard to keep up. How her mother reacted to the phobia was not how I picture a mother reacting, but maybe she needed to be that type of mom to carrying out the ending. This book was full of romance as well, not what I was expecting. Because Eric was a pop star and Tessa was a plain Jane, I did have a hard time fathoming there “meet cute.” The part that I am still up in the air about, whether I liked it or hated it, was the ending. To me it felt like a last minute add on…but the more I think about it, was it?

A.V Gieger deserves 3 out of the 5 bird feathers. Finding someone to fall in love with isn’t always easy, especially if you’re doing it online. Eric and Tessa managed though, or so we think? This book fits in with the current generation of teens, all communication is done through technology. It has lots of tweet sessions and police reports. I wanted to love this novel more, and maybe with time I will. I enjoyed the beginning, but felt like the middle was slow and the ending was just a sucker punch to the face. The ending left me feeling more confused then satisfied and curious. The overall book was a fun read, but once you start taking it apart things get a little mucky.  I would say it’s a fun quick read, but not move to the top of the list to read book.

A.V Gieger kept this one relatively clean! Something I always admire about authors. I would let me 14/15 year old read this. There were a few swear words, and a few mentions of sex, but nothing more. It’s a good intro to mystery and thrillers, you know get them ready for Liane Morirarty and Stephen King…