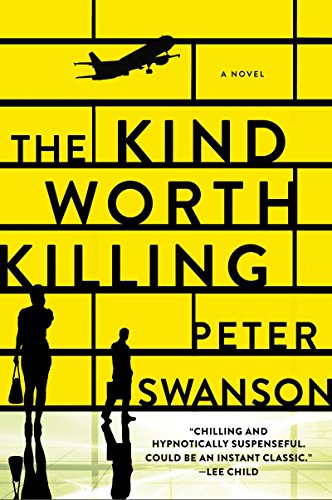 Title: The Kind Worth Killing

Listened to on Libby

A devious tale of psychological suspense involving sex, deception, and an accidental encounter that leads to murder. Fans of Paula Hawkins’ The Girl on the Train will love this modern reimagining of Patricia Highsmith’s classic Strangers on a Trainfrom the author of the acclaimed The Girl with a Clock for a Heart—which the Washington Post said “should be a contender for crime fiction’s best first novel of 2014.”

On a night flight from London to Boston, Ted Severson meets the stunning and mysterious Lily Kintner. Sharing one too many martinis, the strangers begin to play a game of truth, revealing very intimate details about themselves. Ted talks about his marriage that’s going stale and his wife Miranda, who he’s sure is cheating on him. Ted and his wife were a mismatch from the start—he the rich businessman, she the artistic free spirit—a contrast that once inflamed their passion, but has now become a cliché.

But their game turns a little darker when Ted jokes that he could kill Miranda for what she’s done. Lily, without missing a beat, says calmly, “I’d like to help.” After all, some people are the kind worth killing, like a lying, stinking, cheating spouse. . . .

Back in Boston, Ted and Lily’s twisted bond grows stronger as they begin to plot Miranda’s demise. But there are a few things about Lily’s past that she hasn’t shared with Ted, namely her experience in the art and craft of murder, a journey that began in her very precocious youth.

Suddenly these co-conspirators are embroiled in a chilling game of cat-and-mouse, one they both cannot survive . . . with a shrewd and very determined detective on their tail.

The Kind Worth Killing is well thought out and executed perfectly. It was such an intriguing read, I didn’t want to hit stop. I felt like I was plotting murder with the characters, not just a spectator. I found my self trying to but into their conversations and had to remind myself that this was fiction. Now that’s a good book.

Peter Swanson threw in some plot twists that kept the book going, there was one I wish he would have left out. I won’t give it away… I just wanted a happier ending… for a murder book.

Peter Swanson deserves 5 out of 5 bird feathers for his novel The Kind Worth Killing. This novel was a wild ride and I’m glad I took it. There is a tiny part of me that’s excited to get on a plane… just kidding. Don’t worry, I’m happily married 🙂 I really enjoyed how the story switched back and forth between the two main characters. It allowed me to become better acquainted with them. This book will make you think and that’s why I liked it, very clever! I recommend this book to those who are a little more demented, like me.

It’s all about murder and sex… It’s in the description. There’s also language occasionally.